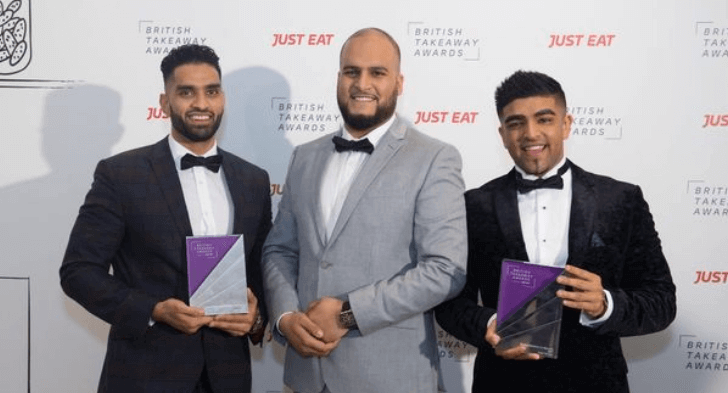 Monday night saw the finals of The British Takeaway Awards at the Savoy Hotel in London hosted by comedian John Bishop. Finalists for the best takeaway chef all took part in a ‘master-chef’ style ‘cook-off’ competition. The dishes were then judged by a panel including celebrity chef Ainsley Harriot who appeared on Sky News on Tuesday morning.

“What really surprised and got to me was that it’s not just about the food that these people produce, it’s what they do in the community,” he said. Lime pickle based in Birmingham get out there in the community, get amongst and support the local people, they support charities and buy from local suppliers,” he said

To win the takeaway awards, you don’t just have to cook great food you have to do something extra such as support the local community and produce real value amongst the community.

Grilled Hotspot secured a place as one of the north west’s five finalists at the start-studded British Takeaway Awards 2017, hosted by comic John Bishop.

Owner of the locally famous takeaway Humad Mustafa attended the Savoy Hotel for the prestigious event, which hosted celebrities such as Kelly Brook, Rachel Riley and TV chef Ainsley Harriott.

He quoted, “Unfortunately we didn’t win our region, but it was a big achievement – not many people can say they have done that, especially considering the number of Just Eat restaurants in the north-west. Top five is pretty impressive.

The hard work has paid off for all takeaways who made the finals, as it’s such an impressive accolade. All finalists should be incredibly proud of what they have achieved – not just in the competition but in their respective local communities.

In 2016 UK consumers spent over £9 billion on takeaway foods, and the trend has never been more positive.

Ben Hodgson from EatFirst a new concept whereby food arrives in a chilled condition, and you can choose to re-heat it at a time convenient to you.

If you are a takeaway business looking for finance, we can help unlock cash against customer credit card orders in-store and online, including JustEat. Apply online today and get your free no-obligation quote!