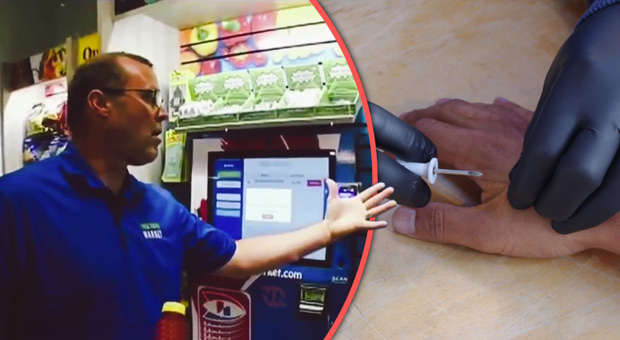 Around fifty employees at Three Square Market based in Wisconsin, USA, are being offered a RFID encrypted implant which will be inserted under the skin between thumb and forefinger.

The RFID micro chip priced around £230 each device is about the size of a grain of rice and will enable staff to use just their hand to pay for products, open doors to secure areas, access computers and more. Whether the employees may be tracked by GPS in the future is still up for debate.

The tech giant is the first company in the United States to microchip their employees and so far 50 the company’s 85 employee’s have raised their hand to willingly take part in the project.

“Eventually, this technology will become standardized allowing you to use this as your passport, public transit, all purchasing opportunities, etc.,” the company said in a press release, Fox News reported. “We see chip technology as the next evolution in payment systems, much like micro markets have steadily replaced vending machines.” Three Square Market CEO.

THE FUTURE IS NOW: A Wisconsin company will soon offer its employees microchip implants… in their hands. pic.twitter.com/88NZMFJ6VB

The company took inspiration from ‘bio hackers’ in Sweden who have been implanting such technology into participants for the last three years and are now working with Swedish company BioHax to deliver the product to mass market.

So could this be the way forward for payment technology and replace card payments and other tech based technology altogether? It seems inevitable that Bio identification and payments are coming but is it too soon? Are we really ready to become half human half credit card?

The company says that they hope the technology will replace most things in your wallet and on your phone, your keyfob, your credit and debit card, identification such as drivers licence, passport information and more.

What are your thoughts? Are we really ready for this, could we be hacked or even robbed of such technology from right under our skin?