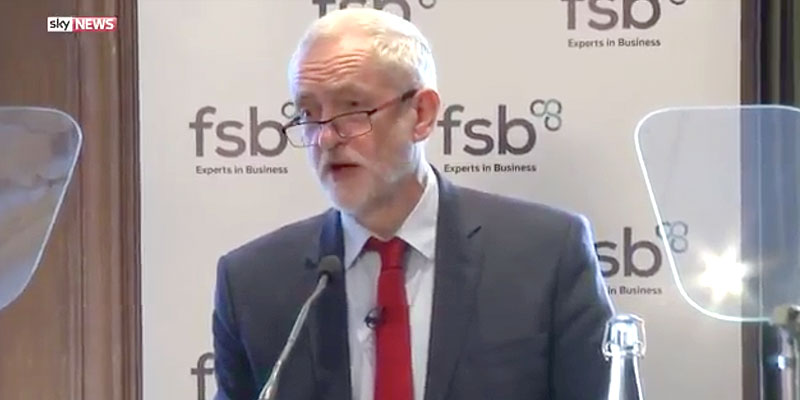 Has Jeremy Corbyn got a point when it comes to large businesses making late payments to small firms or has his data team fed him with incorrect data? It seems there is an argument from both sides.

Jeremy Corbyn has promised to crack down on large firms late paying smaller businesses. In today’s speech at the Federation of Small Business Conference, the Labour leader ‘declared war on late payments from corporate giants’.

His speech surrounded many aspects of new reforms which will help small business owners, small-time entrepreneurs, self-employed and local firms with cash flow issues including funding. As well as the main impetus on large firms late paying their small counterparts Jeremy Corbyn is also promising to cut the red tape for businesses with a turnover less than £83k.

He is also putting in proposals for a network of regional investment banks to help smaller business access the funding they need to grow and expand.

Corbyn also named and shamed corporate businesses from withholding more than £26 Billion from suppliers through late payment which in turn is helping to drive over 50,000 firms out of business. The Labour leader vowing to tackle this ‘national scandal’ if Labour wins the next election.

He pointed out that many of the big businesses are managing their own cash flow at the expense of the smaller firms adding they are are borrowing interest-free from their suppliers.

He added that some of these firms are holding huge amounts in stockpiled bank accounts – cash which ‘doesn’t belong to them’.

The likes of Capita for example on average pay their suppliers 82 days later than agreed terms. Capita is one of the UK government’s biggest contractors. Capita responded by saying they ‘don’t recognise these figures whatsoever claiming they pay over 90% of supplier invoices on 30 days agreed terms’.

He also named Marks and Spencer as late payers. “They pay on average 72 days to terms agreed,” he said. A Marks and Spencer spokesperson refuted the claim saying that over 99% of suppliers are paid on time.” Would that be 100% then?

If anything these statements are making the corporates sit up and take a little more moral action with their payment terms.

The Federation of Small business speech was not without incident. It seemed a BBC journalist was shouted down by the room and by Corbyn himself when prompting the opposition leader to comment on its political stance on Syria. Probably not the best time or place to pose the question – what are your thoughts?