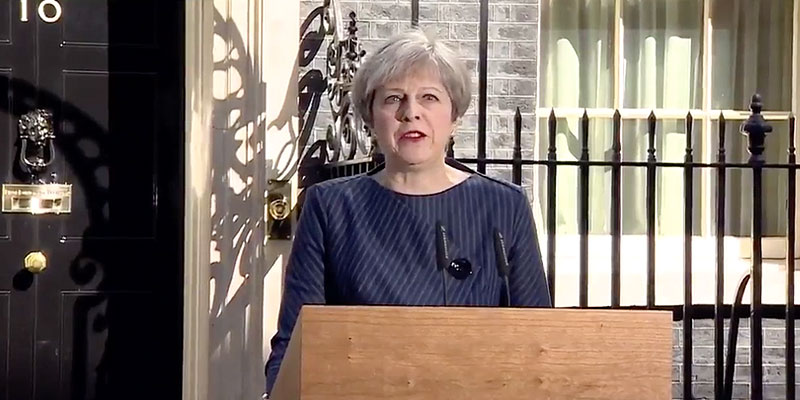 Theresa May has called for a snap general election on June the 8th based on the message that it is the only way to secure stability throughout Brexit.

A general election will "guarantee certainty and stability for the years ahead" – @Theresa_May https://t.co/AJAEO9hRcQ pic.twitter.com/YDey9nlosb

There has been widespread speculation that Theresa May would look to the polls to re-secure her position as Prime Minister as we as a nation negotiate Brexit.

It would also seem that it has come at a time where she is confident of beating Labour especially as Labour have a poor position in the polls already. Many of Labour’s MP’s have strong reservations that Jeremy Corbyn is not the right man to lead the party so with the party so split surely this is adding to the opportunity that May is considering?

Theresa May is looking for MP’s to back her decision to call a snap general election by having a meeting this coming Wednesday where it is hoped she will receive the full support of her party.

Commenting in a speech at Downing Street the PM said “At this moment of enormous national significance, there should be unity in Westminster, but instead there is division. In recent weeks Labour has threatened to vote against the final agreement we reached with the European Union. The Liberal Democrats have said they want to grind the business of government to a standstill and Scottish National Party have said they will vote against the legislation that formerly repeals Britain’s membership of the European Union and unelected members of the House of Lords have vowed to fight us every step of the way.”

Her concern is that there will be constant political challenges throughout the Brexit process. Other parties using Brexit negotiations to leverage political support through a difficult time. May calling it ‘their political game playing’. She could be right of course. Brexit being so fundamentally crucial to the UK – we won’t get another chance to re-negotiate of course.

With today’s announcement, many businesses are responding positively. They understand the significance of ‘getting the job done right’ without invasive political point scoring. The pound has also recovered, responding well to the news of a snap election. Sterling is at its highest level since the beginning of February – it’s still not anywhere near the level before the UK voted to leave the UK in June however.

The finance market is stable with just as many businesses applying for alternative finance such as merchant cash advance illustrating that there is an air of confidence from the business community towards the news.