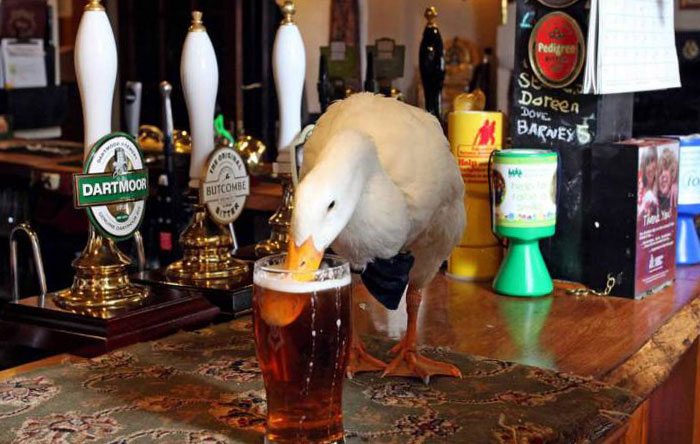 Recently a fight broke out between a duck and a dog at the Old Courthouse Inn, Chumleigh, Devon. The bow-tie wearing duck named ‘Star’ is well known in her village for waddling in and out of the local pubs sampling fine real ales with his master Barrie Hayman. On this occasion though Star must of had one too many as she started a stare off with another local pooch ‘Meggie’ which led to the all out pub brawl which saw Star come off with a split lip (I mean beak)…

Barrie, owner of the drinking pals Star and Meggie said “Star pushed his luck too far and Meggie snapped. He gave her a stare, then promptly stood on her back and splitting Star’s bottom beak right down the middle. It was not pretty and not nice. We were so scared we would lose Star”

The vets assured Barrie that Star would make a full recovery and suggested changing her beverage to a lighter alcohol content on future drinking sessions. Landlords and locals were happy to see Star back removed from the local Pubwatch program and back on her stool in the Old Courthouse Pub today happily supping away as if nothing ever happened.