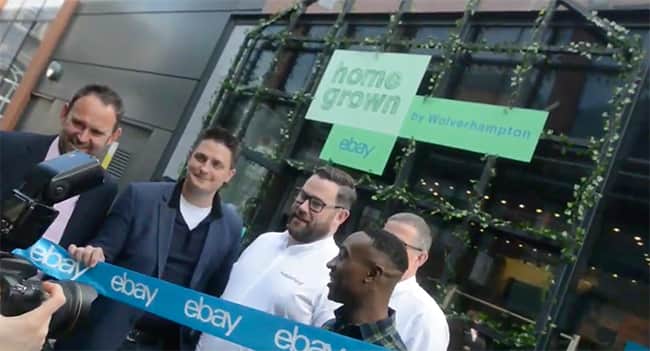 Part of their own ‘retail revival’ programme, eBay is hoping to educate and support small business owners and help them see the benefit of selling online as well as in their physical shops.

The pop-up concept store opened in Wolverhampton as a test initiative for one month and involved 40 small companies in total. eBay began their year-long retail revival programme in September 2018 and set out to help educate small businesses and create harmony between online and offline. Many of the firms involved have never sold online, so eBay is offered one to one support from selling basics, how to create a personalised eBay shop and vital digital skills like social media marketing and search engine optimisation. Guiding and helping small businesses who felt pushed out by online retail would hopefully create and build strong relationships between eBay and the programme’s participants.

The relationship between e-commerce and brick and mortar retail has been strained for some time, but eBay seems to be stepping in early to do some damage control and repair those relationships. After all, the majority of shops on eBay are run by small business owners. eBay has dominated online auction platforms since its launch in 1995, and today 81% of items being sold come brand new from small businesses, so eBay understands how meaningful their relationships with this type of retailer is.

As of mid 2020 there are approximately 182 million users on eBay globally and a the eBay app saw a whopping 476 million downloads.  eBay attributes this global growth to its recent efforts by improving the buying and selling experience for its users. They include simplifying buyers’ returns processes and facilitating purchases for volume-based discounted products.

Smaller companies opt to hop on eBay when they want to begin their e-commerce operation or if they’re finding other online routes like a website is just not working for them at that time.

The Wolverhampton initiative had already surpassed the £2 million mark in sales by March 2019, only six months after it began. For retailers who had no previous online presence, this is huge. Not only is it bridging that gap between online and offline sales, but both working in harmony together means everyone wins.

The marketing teams behind Online platforms are seeing that many consumers are missing that human connection. Talking to someone who knows everything about the product and being able to help them with any query, so instead of trying to squeeze them out of a market, they’re encouraging them to participate and see that they can thrive with both retail avenues.

Development Economics conducted some research into e-commerce and small businesses, finding out that 25% of small retail stores in the UK do not currently have an e-commerce site. By having an additional income stream such as an e-commerce website, the research showed that small businesses could benefit from as much as £4.1 billion in extra sales revenue each year. Let’s break that down to each business, and on average they could earn £19,250 in additional sales. Not something to be sniffed at.

Vice President of eBay in the UK, Rob Hattrell commented: “The small retailers who took part in Wolverhampton’s retail revival had already shown that physical and online retail can survive, and thrive, together. They had achieved more than £2 million in sales as of March, and many have employed more staff as a direct result of the partnership. This pop-up store took that growth, and the value of this programme, to the next level.”

With retail becoming increasingly digital and some say losing that personal human touch, he added: “It explores how stores of the future could combine technology with that vital human connection to powerful effect, whatever the size of the business.”

The retail revival programme continued to support participants in Wolverhampton until the end of November 2019 when the programme finished. Positive results came out of the programme and Hattrells comments about taking growth to the next level, it seems that this is a programme that could evolve into something much bigger.

If you are looking to grow your Ebay store and need funding for Cashflow check out this article: